The USS Abraham Lincoln sailed through the Strait of Hormuz on Sunday, peacefully arriving in the Persian Gulf after Iran withdrew a threatening ultimatum concerning the presence of US warships in the Gulf.

The present voyage of the Lincoln is the completion of a “regular and routine” trip through the strait which was “previously scheduled and without incident” according to Lieutenant Rebecca Rebarich, a spokeswoman for the U.S. Fifth Fleet.

Critical Waterway for Commerce and Oil

The Strait of Hormuz is of critical significance to commerce in the region, especially concerning the trade of oil exports from the Middle East.

The Lincoln, the first aircraft carrier to enter the Persian Gulf since December, sailed together with a strike group of warships accompanying it on what was a routine rotation to take the place of the departed USS John Stennis.

After the Stennis left the Gulf the Iranian army Chief Ataollah Salehi was prompted to announce that there could be consequences of an unpleasant nature if the aircraft carrier was to return to the Gulf.

“I recommend and emphasize to the American carrier not to return to the Persian Gulf. … We are not in the habit of warning more than once,” he said.

The initial threatening remark led to escalating responses from both sides which frightened some of the global oil markets and raised the unpleasant thought that the tough words could lead to harsh actions on either side.

Iran threatened to close down the strait, a disastrous move since the Strait of Hormuz is the world’s most important gateway for the shipment of oil. The US returned the threat by saying that such a move would require a response from Washington. The US has long taken responsibility for insuring that international sea lanes are kept open.

Eventually Iran backed off from much of the threatening rhetoric. On Saturday the Revolutionary Guard Corps Deputy Commander Hossein Salami told the official IRNA news agency that there was no reason to feel threatened by the return of the US warships to the Gulf as it was just part of the US’s normal permanent presence in the Gulf, and not an escalation of that presence.

“U.S. warships and military forces have been in the Persian Gulf and the Middle East region for many years and their decision in relation to the dispatch of a new warship is not a new issue and it should be interpreted as part of their permanent presence,” Salami said.

The US did not comment directly on Salami’s remarks, but rather re-stated the US’s position that the continuing presence of the US in the region is a reflection of the importance that Washington places on security in the area and the US’s commitment to that security, guaranteeing the free flow of international commerce. 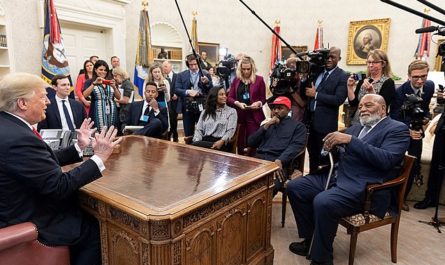 Kanya West Adds His Name to the Mississippi Ballot