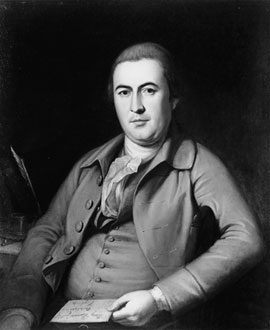 Benjamin Harrison was born in Berkeley Virginia in 1726. He attended William and Mary College in Williamsburg, but was unable to complete his studies due to the sudden death of his father and two sisters in a lightening strike. He was elected to the House of Burgesses at the age of 38. In 1764, when the House defied the Royal Governor & passed the Stamp Act Resolutions, the Governor tried to bribe Harrison with an appointment to the executive council. He refused the appointment and instead declared a devotion to republican principles. Elected to the Continental Congress in 1774, he was one of a party of representatives who, the following year, attended General Washington in Cambridge to plan the future of the American Army.

In 1777 he returned to Virginia to a seat in the House of Burgesses and also to serve as a lieutenant in his county militia. He was chosen Speaker of the House in 1778, and elected Governor of the State of Virginia in 1782. He retired from the Governor’s office after five years service. Harrison suffered with gout during his later years. He died in 1791 at the age of 65.

His son, William Henry Harrison, was elected ninth President of the United States.