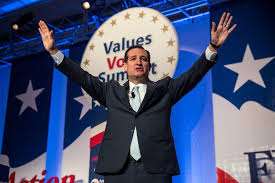 There was no shortage of talented speakers at the Values Voters Summit, an annual political conference created to showcase conservative elected officials and activists from all over the United States.  Taking place in the Omni Shoreham Hotel in Washington, DC from September 26-28, this year’s conference heard from the likes of Rand Paul, Rick Santorum and Michele Bachmann, speaking on the usual subjects such as foreign policy, family values and the war on radical Islam.

There is no question, however, whose speech won the hearts and minds of attendees: Ted Cruz. The Texas senator spell-bound his audience during his 30 minute speech: quoting Psalms and “Amazing Grace” and telling personal stories from his childhood, Cruz received applause, and even a few standing ovations during his remarks.

Cruz told the tale of how, when he was only three years old, his father abandoned his family only to return a short time later after having discovered religion.

“So when anyone asks, ‘Is faith real, is a relationship with Jesus real?’ I can tell you if it were not for my father giving his life to Christ, I would have been raised by a single mother without having my dad in the home,” the first-term senator said. “Every one of us, we have seen first-hand that in utter darkness, hope remains.”

The Values Voters conference is in many ways a preview for the upcoming race for the Republican candidate for the presidency. It seems likely that Cruz will be joining the other probable contenders for the 2016 primaries along with Senator Rand Paul, Rick Santorum, and Governor of Louisiana Bobby Jindal.