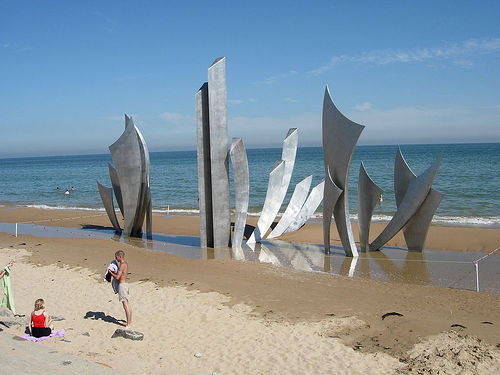 The President might be well-served to watch this video.

It shows a spontaneous demonstration of appreciation for World War II veterans exiting a plane in the Washington D.C. area. No, it wasn’t Memorial Day or another designated day when we are supposed to honor soldiers. It was just a day when a collection of our finest and bravest exited a plane together.

Yesterday, President Barack Obama failed, again, to recognize that it was D-Day, commemorating the Normandy landings from World War II. Thousands of Americans lost their lives as they stormed the Normandy cost in a day that has gone down in the history books.

But not, apparently, in any of the books that Obama has read. Obama didn’t have to put aside the entire day for a commemoration; a simple speech, a small breakfast with Normandy survivors or a similar event would have sufficed. But something should have been done. Instead, Obama is hobnobbing in San Francisco and Los Angeles with his favorite movie stars, drumming up support for his campaign.

This is the third year in a row that Obama has failed to acknowledge D-Day. He gave a speech in 2009 for the 65th anniversary, but has done nothing since then. First Lady Michelle Obama, who hangs her hat on being supportive of our soldiers and their families, was silent as well.

Not only is it shameful that Obama wouldn’t take the time out to acknowledge those who have given so much for our country, but it’s also politically foolish.

Certainly, Obama could learn a few lessons from ordinary people who were at Reagan National Airport on May 23rd, 2012.