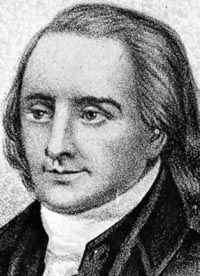 Francis Lightfoot Lee (brother of R.H. Lee) was born in Westmoreland, Virginia, on the fourteenth of October, 1734. He was educated at home by Doctor Craig, in the manner of an enlightened country gentleman. In 1765 he was elected to the Virginia House of Burgesses, where he served until 1775. He was a noted radical, on the side of Patrick Henry in opposing the Stamp Act. He Joined the group who called for a general congress and a Virginia Convention in 1774. He attended that convention and that year was sent to the first Continental Congress. He represented his state there until 1779, working on numerous committees. He retired from the Congress in 1779 and returned to his home. He served for a while in the Virginia Senate and then retired to private life. He died in 1797.