It looks like First Lady Michelle Obama has done it again.  While promoting her “Let’s Move” program, and supporting the worthy goals of TV’s “The Biggest Loser” she has shown herself to be the loser.  According to a picture on the White House Dossier with Keith Koffler, Michelle recently hosted contestants from The Biggest Loser at the White House.  The public will be privy to the two-part makeover episode when it airs on April 3 and 10. 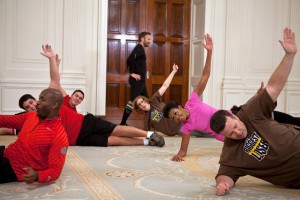 What makes Michelle a loser, however, isn’t that she hosted the contestants. It’s where she hosted them that matters. In a picture unearthed by Koffler, Michelle appears to be exercising with the group – in the historic and incredibly elaborate East Room.  The East Room, where presidential press conferences have taken place, where historic legislation has been signed, where dramatic parties have taken place, and where Abraham Lincoln’s funeral was even held – isn’t really a gym.

It’s wonderful that the Obamas relate so well to common people; it’s great that Michelle wants America eating well and exercising.  But doesn’t the White House have exercise facilities? Don’t they have a location where 10 people could sweat and grit their teeth – that isn’t on elaborate historic rugs and in historic rooms?

According to sources familiar with the program, viewers will get to see the contestants get a surprise invitation to the White House from Michelle Obama. They’ll receive a makeover at the White House and be reunited with family members. Then, during the second episode, they’ll meet the First Lady and will hear about healthy living while they sweat it up in the East Room.  NBC reports that the contestants will also be challenged to sign up as many participants as possible for the Presidential Active Lifestyle Award. 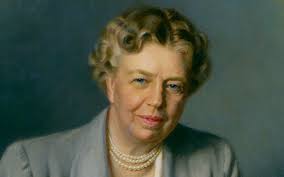