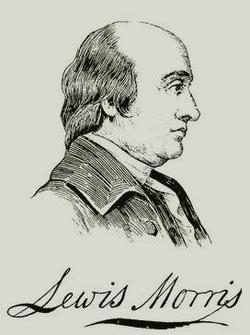 Lewis Morris was born in New York in 1726. He inherited great wealth, most of which was lost during the war. He graduated at Yale College in 1746, and returned to the farm of his father, in Lower West Chester, near Harlem. When his father passed on he became engaged in politics. He served in the Provincial legislature shortly before the troubles with Gr. Britain began and before it was dissolved by the royal governor. Morris joined with the patriots when conflict began, siding , in many cases, against his wealthy neighbors. He convinced local politicians to send representatives to the re-formed Legislature in April of 1775. That congress appointed delegates to the second Continental Congress, and Morris was one. He served on committees for the defense of New York, one for provisioning colonial forces, and another for Indian affairs. These tasks carried him throughout New England in the first few years of the war. He also served as a brigadier-general in the New York militia and so was often torn between his duties in congress and those to the defense of his own colony. In 1777, he was succeeded in congress by his brother, Gouverneur Morris. He returned to his local duties, later served as a judge in Worchester, and served intermittently as a member of the upper house of the new legislature until 1790. All of the Morris property and nearly all of his wealth had been destroyed in the revolution. Lewis spend several years working to rebuild his farm. He also served on the first Board of Regents for the University of New York. He died in January 1798 at the age of seventy two.