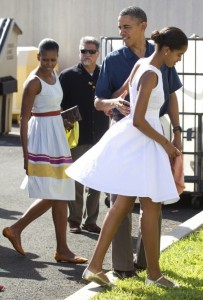 Michelle Obama may be enjoying her holiday vacation – but her choice of wardrobe is taking a beating. Not that it’s ugly or inappropriate attire – but that it’s potentially riling taxpayers who see her lavish choices.

She’s only been seen in Hawaii a few times during her vacation, but those appearances have shown quite a taste for high-end fashion. On Christmas Day, for instance, she was seen at the church service at the Kaneohe Bay Marine Base wearing a simple white dress by U.S. based designer Sophie Theallet – with a price tag of almost $2000.

Later, during a meet-and-greet event with the service members and their families, she sported a Comme des Garcons skirt that cost around $950.

Certainly, some are criticizing the First Lady for making such expensive choices when she tries to portray herself as a typical American. She is, of course, wearing clothing that a typical American couldn’t afford.

Others, however, say that her clothing is her own choice and that it’s coming from her budget, and not from the American people.