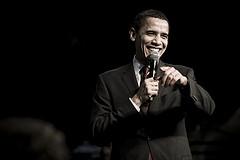 The viewer level may have been down for the State of the Union address, but Obama's spirits are definitely up.  Tuesday's viewing of the address saw 37.8 million television viewers, according to the Nielson company figures.  This is, by far, the least number of viewers that have watched one of his addresses.

During his first year in office, Obama drew 52.3 million viewers to his State of the Union address.  By 2010 there were 48 million, and by 2011 there were 42.8 million.  It isn't surprising, per se, that the numbers would drop every year, as any novelty draws more attention.

However, the disinterest or frustration of the American voter is definitely not putting a damper on Obama's energy or optimism – at least outwardly.  Arriving in Iowa Wednesday, Obama actually jogged off the plane, grinning from ear to ear (and making his secret service sweat behind him).

Later, at a conveyer manufacturing plant in Cedar Rapids, he said, “Our economy is getting stronger, and we’ve come too far to turn back now.” Talking about the Republicans and their plans, he said, “Their philosophy is simple: We’re better off when everyone is left to fend for themselves and play by their own rules. Well, I am here to say they are wrong."

Time will tell is Obama can keep up his enthusiasm and optimism – and his polls.