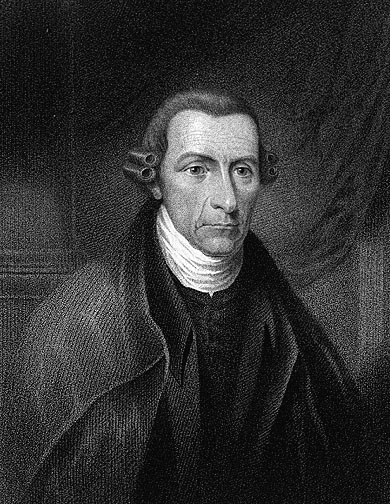 “Radical,” is a title that few men can wear with ease. The name Patrick Henry, during the revolution and for some time after, was synonymous with that word in the minds of colonists and Empire alike. Henry’s reputation as a passionate and fiery orator exceeded even that of Samuel Adams. His Stamp Act Resolutions were, arguably, the first shot fired in the Revolutionary War.

Patrick Henry’s personality was a curious antidote to the stern honor of George Washington, the refined logic of Jefferson, and the well-tempered industry of Franklin. Young Henry was an idler and by many accounts a derelict; though everyone knew he was bright, he simply would not lift a finger except to his own pleasure. By the age of 10, his family knew that he would not be a farmer, and tried instead to train him toward academe. He would not apply himself to studies either. At age 21 his father set him up in a business that he bankrupted shortly thereafter. Finally the general public disgust in Hanover and pressure from his young family (he had married at the age of eighteen) caused him to study for six weeks and take the bar exam, which he passed, and begin work as a lawyer.

In 1764 he moved to Louisa county, Virginia, where, as a lawyer, he argued in defense of broad voting rights (suffrage) before the House of Burgesses. The following year he was elected to the House and soon became its leading radical member. It was that year that he proposed the Virginia Stamp Act Resolutions. Few members of the Burgesses, as aristocratic a group of legislators as existed in the colonies, would argue openly for defiance of Gr. Britain. Henry argued with remarkable eloquence and fervor in favor of the five acts, which by most accounts amounted to a treason against the mother country. In 1774 he represented Virginia in the First Continental Congress where he continued in the role of firebrand. At the outbreak of the revolution, he returned to his native state and lead militia in defense of Virginia’s gunpowder store, when the royal Governor spirited it aboard a British ship. Henry forced the Governor Lord Dunmore to pay for the power at fair price.

In 1776, Henry was elected Governor of Virginia. He was re-elected for three terms and then succeeded by Thomas Jefferson. He was again elected to the office in 1784. Patrick Henry was a strong critic of the constitution proposed in 1787. He was in favor of the strongest possible government for the individual states, and a weak federal government. He was also very critical of the fact that the convention was conducted in secret.

President Washington appointed him Secretary of State in 1795, but Henry declined the office. In 1799, President Adams appointed him envoy to France, but failing health required him to decline this office too. He died on the sixth of June, 1799 at the age of sixty-two.