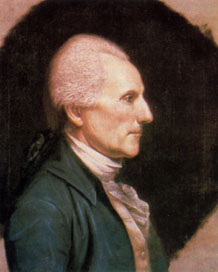 Richard Henry Lee (brother of F.L. Lee) was born to an aristocratic family at Stratford, in Westmoreland county, Virginia. He attended a private school in England, returning to Virginia in 1751. That being the era of the French and Indian War, Lee formed a militia troop of young men in his neighborhood, was elected the leader, and marched his troop to a council in Alexandria where General Braddock was preparing a campaign on the Ohio river. The young men were rebuffed by the General & returned home. In 1757 Lee was appointed Justice of the Peace, and was shortly thereafter elected to the Virginia House of Burgesses. He was amongst those radical members of the Burgesses who met at the Raleigh tavern when the house was dissolved by the Royal Governor. In 1774 he was elected to attend the first Continental Congress. He enjoyed many important committee appointments. Noted for his oratory skills, it was he who offered the Resolutions for Independence to the committee of the whole in 1776. He served in Congress through the course of the War, while also serving in the House of Burgesses. In 1783 he was selected as president of Congress.

Lee opposed the federal constitution, as he favored strong state rights. He was; however, elected the first State Senator from Virginia under the new federal government. He retired from that office to his home in Chantilly due to illness, and soon after died at the age of sixty three.