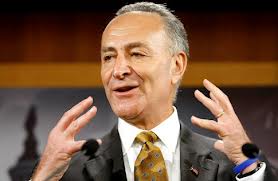 “His budget is one of the most fraudulent documents I’ve ever seen,” Schumer told CBS’s “This Morning.” “He takes every nickel of that savings and doesn’t use it for deficit reduction. He uses it to reduce taxes on the wealthy, further.”

“Everyone attacks Democrats for budget issues — Ryan should be attacked, and now he is,” added Schumer.

Schumer also criticized Ryan for talking about the Simpson-Bowles deficit-reduction plan in his speech, but refrained from mentioning that he (Ryan) was part of the commission.

“The fact that in his speech he blatantly told mistruth after mistruth … How can you blame President Obama on Bowles-Simpson when [Ryan is] the No. 1 reason [it failed]? If he voted for Bowles-Simpson, we’d have it now. That is an act of chutzpah,” said Schumer.

Romney and Ryan responded by pointing out that the Democrats have still not passed a budget.

“If anyone knows ‘chutzpah’ it’s Senator Schumer. He and President Obama haven’t passed a budget since before the iPad existed. The Romney-Ryan plan would balance the budget, while President Obama only offers more debt as far as the eye can see,” said Brendan Buck, a spokesperson for the Romney campaign.