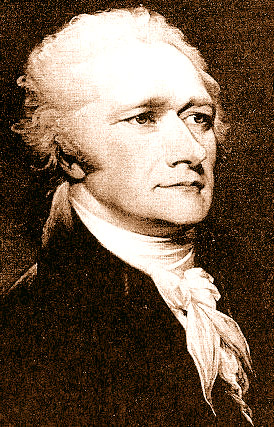 Alexander Hamilton was born on January 11th 1755 (1757). He served as the first United States Secretary of the Treasury. Hamilton is considered to be on of the Founding Fathers and an extraordinary economist, and political philosopher. Hamilton acted as an Aide-de-camp to General George Washington during the American Revolutionary War and was a leader of American nationalists calling for a new Constitution. Hamilton was one of America’s first constitutional lawyers, and was the author of most of the Federalist Papers that served as a primary source for Constitutional interpretation. Hamilton was responsible for the economic policies of the administration of George Washington focusing on the funding of the state debts by the Federal government. Hamilton is credited with the establishment of a national bank, a system of tariffs, and friendly trade relations with Britain. He was the initiator of the Federalist Party and thus came to dominate. It was because of this that he was opposed by Thomas Jefferson and his Democratic-Republican Party. Although Jefferson claimed Hamilton “as too loose with the Constitution, too favorable to monarchy and particularly to Britain, and too partial to the moneyed interests of the cities at home,” Hamilton’s policies were still enacted. Hamilton helped defeat the tax revolt of western farmers in 1794 through the establishment of strong militaristic government and from this built a new army in preparation for war with France in the Quasi War of 1798, but did not occur due to John Adams finding a diplomatic solution instead. Although Hamilton and Adams were both Federalists, Hamilton opposed Adams, along with the opposition candidates Jefferson and Aaron Burr, in the election of 1800. Despite his opposition to Thomas Jefferson, Alexander Hamilton supported him over Burr when the House of Representatives had to choose in an electoral tie between them. Tensions between Hamilton and Burr continued to rise to a duel, resulting in Hamilton being killed.