Despite the rain and cold, hundreds of conservative Tea Party protestors were out in force on Saturday listening to speakers, tearing up copies of Obama’s health care law, and waving flags in front of the US Capitol.

The Tea Party movement is adamantly opposed to President Obama’s health care reform legislation, saying that it is socialist and even an illegal extension of federal power, in a similar that Social Security and income taxes had been. The ultra-conservative activists believe that the law is not just a violation of the Constitution, but a serious threat to traditional American freedoms.

The rally was held on the eve of this week’s upcoming Supreme Court hearings beginning on Monday. Six hours of arguments for and against the ground-breaking health care reform legislation are scheduled to be heard over three days.

“If Obamacare stands, I would have, you would have, future generations would have a future that not even George Orwell could have foreseen coming,” Representative Louie Gohmert, a Texas Republican, exclaimed to the demonstrators. (George Orwell is the author of the futuristic book about oppressive government called “1984.”)

Protestors waved signs reading, “Keep your politics out of my health care,” and “Obamacare is Unconstitutional.” Whenever a reference was made to conservative pundit Andrew Breitbart, who died earlier this month, the crowd cheered.

Former Republican contender for president, Herman Cain, who left the race for his party’s nomination last December, said that the protest was not about repealing the law, which has been in force for the past two years.

Cain said, “This is about getting our freedom back to just be free to make our own decisions with our lives.”

The law is up for review by the Supreme Court due to a legal challenge by The National Federation of Small Business and 26 US states, who believe that the law violates the US Constitution. The main feature of the law is the requirement contained within it forcing all adults to purchase health care coverage. 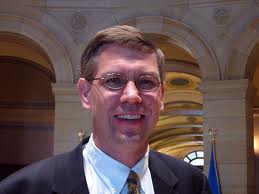