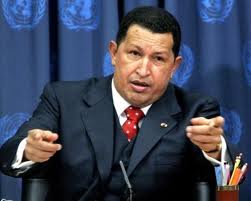 Venezuelan President Hugo Chavez is taking shots at America. During a nationally televised speech to the military, Chavez hinted that America very well might be behind recent cancers that have befallen South American leaders. His words came on the back of Argentine President Christina Fernandez de Kirchner’s announcement that she had thyroid cancer.

Chavez said that the CIA had used chemical experiments in Guatemala in the 1940s, and that we may see in the coming years that the U.S. has spread cancer as a political weapon against its critics.

“It’s very difficult to explain, even with the law of probabilities, what has been happening to some of us in Latin America.”

He continued by saying, “Would it be so strange that they’ve invented technology to spread cancer and we won’t know about it for 50 years?”

Chavez has gone so far as to call for a regional summit of leaders who have all battled cancer. And, he even warned Evo Morales and Rafael Correa, leaders of Bolivia and Ecuador, to