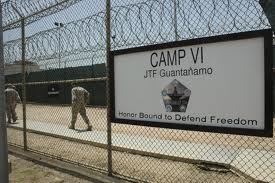 Sixteen major news outlets have filed a motion in a US federal court in Washington DC on June 19 seeking access to videotapes taken of a prisoner in the Guantánamo Bay detention center being force-fed. The videos are now filed with the court under seal.

The media organizations include The New York Times, The Washington Post, The Associated Press, and thirteen others. The suit states that the First Amendment “requires the Government to demonstrate to this Court that a compelling need demands the videotape evidence to be kept from the public, and nothing on the public record indicates the Government has met its burden.”

“Although the Government has classified the videotapes, it is no secret that force-feeding is being used at Guantánamo; nor is there any secret regarding how it is used,” the companies argue. “To the contrary, the public access right should be fully enforced because the videotapes are the most direct and informative evidence of Government conduct that petitioner alleges to be unlawful, and the videotapes form an important part of the record upon which the Court evaluated Dhiab’s application for a TRO and will base its preliminary injunction ruling. The public is entitled to view this evidence to satisfy itself of the fairness of the outcome of this proceeding and to exercise democratic oversight of its Government.”

A lawyer representing the detainee who was force-fed after going on a hunger strike said that after she viewed the videos of the force feeing had trouble sleeping. Last month US District Judge Gladys Kessler, the judge in the case, ordered the government to release the tapes.

The detainee, Abu Wa’el Dhiab was permitted to leave Guantánamo in 2009. He has been held there since 2002, since he was 30 years-old.