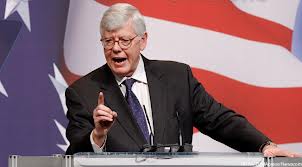 In the wake of last month’s tragic slaying of 26 young children, teachers, and school staff at the Sandy Hook Elementary school in Newtown, Connecticut, a presidential task force led by Vice President Joe Biden was set up to investigate what can be done to prevent gun violence which seems to be rampaging through the country.

In response the president of the National Rifle Association, David Keene said that it is highly unlikely that any legislation banning, or severly limiting, access to assault weapons would fail in Congress. He further explained that there is a “profound disagreement” between the NRA and the Obama administration on how to address the aftermath of the Newtown massacre.

“I do not think that there is going to be a ban on so-called assault weapons passed by the Congress,” Keene said the “Today” show.

Keene continued to say that a ban on assault weapons is nothing but a “feel good” idea which is doomed to failure.

“You know, if you’re looking at the problem, which is to prevent this sort of thing, what you want to do is do those things that will actually make a difference,” Keene said on NBC’s “Today” show. “We have a profound disagreement with this administration, first of all, on what would make a difference. We don’t think that a ban on so-called assault weapons, which hasn’t worked in the past, is going to work this time.”

Keene also stated that, “We think many of those proposals are basically feel-good proposals and what we really need to do is get to the question of why this is happening and what can be done about it. I don’t think there’s any lack of concern about dealing with the problem. I think there’s a very different view as to what the problem is and how to solve it.”

Biden is scheduled to meet with White House officials on Tuesday to discuss the task force’s recommendations. Biden also met with representatives from the NRA last week to discuss the issue, but the NRA representatives were not impressed with the meeting, saying it was cursory, like the administration was just “checking off a box.”

Keene said the focus of the response should be on improving mental health care in the country, not banning guns.

“We’re focused on school security,” Keene said. “We’re very concerned about the mental health system in this country. We think those who have been adjudicated to be potentially violently mentally ill should be on the databases that are checked when they try to buy firearms. The vice president and his folks are focusing primarily on firearms ownership and what we consider Second Amendment rights of the American people.”

Seven Bucks a Gallon on Catalina Island Taken in Stride