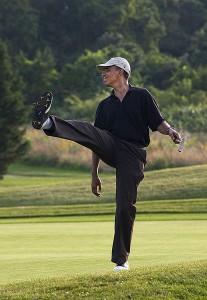 Wouldn’t it be nice if every American could have as much vacation time as the president seems to. On Saturday, December 17th, the president will be packing up and moving to his “Winter White House” on Honolulu for 17 days, until Monday, January 2.

Getting Ready for Vacation

While Obama was just on the island –he was there for an economic summit. Now, he will be heading back for a great deal of R and R. The president has no public events scheduled for the time period at all, and he will be joined by wife Michelle and daughters Malia and Sasha.

Now, before we scream too loudly about the expense of all of this, the president’s family does cover the cost of their resort say. Dubbed a “Winter White House,” on Kailua, Oahu, the private beach front residence costs about $3,500 a day, and will be covered by the family. However, his travel expenses and his security will continue to be covered by both local and federal taxes.

Last year, a similar trip that Obama took cost more than $1 million, as reported by the Hawaii Reporter. The Secret Service and Navy Seals bill was approximately $16,000 last year, while the hotel bill for the 24 White House staff who came along was $134,400. Further bills included the $250,000 for local police overtime and the $1 million for the president’s round trip flight on Air Force One.

This comes on the back of an 11 day stay that the first family enjoyed on Martha’s Vineyard earlier this year. If only we could all afford such vacations!