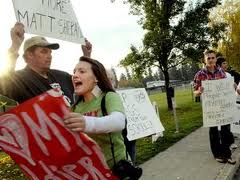 It would sound like a joke it if weren’t so pathetically true.  Shaun Patrick Winkler is on the ballot to become sheriff of Idaho’s Bonner County. The primary for the Republican nomination will be on May 15th and is, currently, a three-way race.  He has an unusual resume, leading many to find his bid downright embarrassing.

In addition to his conviction as a batterer, Winkler worked for the Aryan Nations leader.  The list of those who are angry, sickened and disgruntled with his run gets longer every day.  As Janice Schoonover, co-owners of Western Pleasure Guest Ranch in Sandpoint said,

"We haven't been able to shake that stereotype of white supremacists, and it's really unfortunate and unfair. This just stirs the pot and makes us seem like something we're not."

Winkler has explained to the Bonner County Daily Bee that he’s running because of the larger federal reach that he sees into Bonner County.

Just this past January, Winkler identified that he was a member of the White Knights of the KKK and he picketed a Martin Luther King Day celebration for school kids at North Idaho College.  Last year, he demonstrated at taco stands to focus on Latinos in Coeur d’Alene.

Of course, Cornel Rasor, the chair of the Bonner County Republicans, said that the area supports Winkler’s right to say what he believes.  Quietly, however, local Republicans are embarrassed by his bid. Brenda Hammond, the head of the Bonner County Human Rights Task Force, is trying to look at this experience as a lesson for many. She is calling it a “wake-up call.” As she said,

"We know that all of the people who think like Shaun Winkler haven't gone away. We will ensure people know what he stands for – and he's been very open about that."