Mincing no words on Saturday, U.S. Secretary of State Hillary Clinton warned Iran not to interfere with activities in Iraq. This warning comes on the heels of President Barack Obama’s announcement that he would be withdrawing all US troops from Iraq by the year’s end.

Obama has pledged that all American troops will be out of Iraq by the end of the year. This will end an invasion that started in 2003, when then President George W. Bush ordered the invasion of Iraq.

While visiting Tajikistan in Central Asia on Saturday, Clinton said,

“As we open this new chapter in a relationship with a sovereign Iraq, to the Iraqis we say: ‘America is with you as you take your next steps in your journey to secure your democracy.”

America Will Stand with Allies

She continued by saying, “And to countries in the region, especially Iraq’s neighbors, we want to emphasize that America will stand with our allies and friends, including Iraq, in defense of our common security and interests. We will have a robust continuing presence throughout the region, which is proof of our ongoing commitment to Iraq and to the future of that region, which holds such promise and should be free from outside interference to continue on a pathway to democracy.” 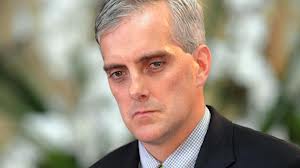